All about Panipat & City Guide

Panipat is an industrial city of Haryana situation on G.T. Road (old National Highway No. 1 and these days NH-44) and the bank of river Yamuna. The refinery of Indian Oil Corporation Ltd. is operational in Panipat which makes it famous along with other main industries in the city like knitting, wool and textile industry. It is one of the major industries of Handlooms, blankets and carpets in India. Earlier it was a part of Karnal district of Haryana and finally became a separate independent district on 1st January 1992. The name of this city "Panipat" was derived from “Panprastha” which was one of the five villages which Pandavas demanded from Duryodhan in Mahabharat.

Panipat is also known as Weaver's City and is famous worldwide for its products related to handloom like bed sheets, bed covers, beddings, mats, carpets, towels, curtain and Dari. These products are mainly exported to most of big countries like Japan, Australia, Canada, France and Germany. The " Shoddy Yarn" of Panipat is famous worldwide because the city is the biggest center of this particular type of yarn. Due to huge industry in this city, it is major center of employment to youth particularly skilled workers and engineers. Panipat also have many points of attractions and tourists places like mausoleum (Dargah) of Muslim saint Abu Ali Kalandar and the battle grounds where three renowned battles of Panipat were fought.

The history of Panipat is very ancient from the time of Mahabharata, it was one of the five villages that the Pandavas demanded from Duryodhana to settle their mutual differences which were arising at that time and its name was Panprastha. After that Panipat has seen 3 historical battles as well. The First Battle of Panipat was fought between Ibrahim Lodhi and Babur in 1526 and Baur won this battle whereas the second was between Akbar and King Vikramaditya in 1556. The third battle was between Marathas and Afghans in 1761.

Being an ancient city which has seen three big battles it has many points of attractions which attract tourists and locals too. These are religious places, Museum and other ancient places which are related to history..

Do you know PanipatGuide.in has been awarded being the first choice of local users as a business directory of Panipat city? 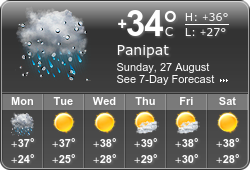 Trending news and latest happening in the city, latest news and information collected from colonies and streets...